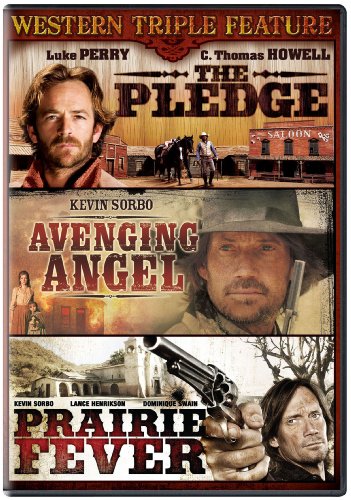 The Pledge: After the murder of his wife and son by an escaped convict, Sheriff Matt Austin sets out to capture him only to find the villain has been hired by a greedy land baron seeking to take land from a widow and her son.

Avenging Angel: He was just a humble preacher – before he lost everything. In the wake of a ruthless crime that stole his family, his church, and the loves of his life, a man known as “The Preacher” (Kevin Sorbo) is conflicted between his faith and revenge. When other innocent people are overrun by the same men who destroyed his quiet family life, The Preacher can no longer stand by. Justice must be served.

Prairie Fever: When ex-lawman Preston Biggs (Kevin Sorbo) is hired to escort a group of women suffering from “prairie fever” back to civilization, they are met by a killer gang intent on stopping their passage. The group finds one last hope when they are joined by a beautiful woman who has the firepower and the will to match anyone.