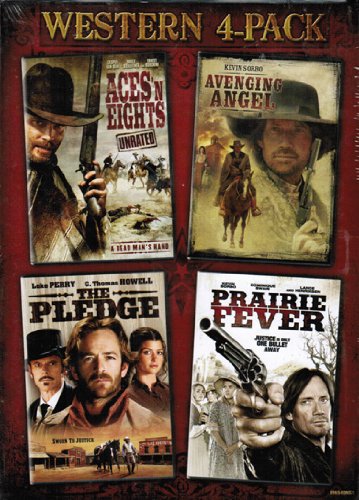 ACES ‘N EIGHTS – A rousing western adventure of the men and women who made the West, Aces N’ Eights is a sure-fire winning draw you can bet on. A war is waged when a small group of steadfast landowners in the frontier town of Nogales band together against a ruthless railroad man who strives to take their land and lay tracks. His cold-blooded gunmen have killed before to get what they want, but now they’ve finally met their match. What ensues is a classic battle of good versus evil. Featuring an all-star ensemble cast including Oscare and Golden Golbe winner Wenest Borgine, Casper Van Dien, And Bruce Boxleitner, Aces N’ Eights is now available for the first time on DVD! AVENGING ANGEL – When a preacher (Kevin Sorbo) defends a local town from greedy land-barons, his church is destroyed and his family is killed. Now known simply as “The Preacher,” he picks up his long-forgotten gun, leaves town, and heads out into the desert to begin a new life as a bounty hunter. Returning years later, he discovers his town has been overrun by the same scoundrels who destroyed his quiet existence. The Preacher can no longer stand by and watch as innocent people suffer the same fate as he. Justice must be served. THE PLEDGE – Following in the success of recent RHI Westerns including Avenging Angel and Prairie Fever, The Pledge follows a country sheriff out for revenge. After the murder of his wife and son by an escaped criminal, Sheriff Matt Austin sets out to capture him only to find he’s been hired by a greedy land baron seeking to take land from a widow and her son. Starring Luke Perry and C. Thomas Howell, The Pledge proves that in the American West, justice must be served. PRAIRIE FEVER – The Western Trail can be a risky one, but for one destitute lawman, it’s a road to redemption. For three troubled women, it’s a journey toward hope.