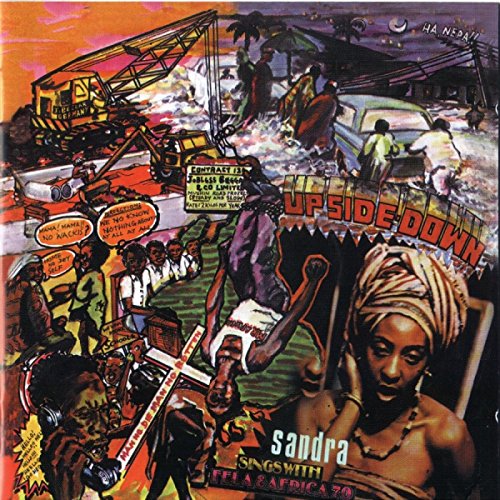 Upside Down and Zombie, both released in 1976, were made at the mid-point of an extraordinary three-year purple period during which Fela recorded 24 albums of new material. Upside Down is unusual in that it includes a second lead vocalist, Fela’s American friend Sandra Izsadore, who he’d known since touring the US in 1969. Fela went through some important changes during the tour. The most far-reaching of these followed his befriending of Izsadore, a black rights activist who introduced him to the writings of Malcolm X, Angela Davis, Rap Brown, Stokely Carmichael, Huey Newton and other revolutionary thinkers. Fela later credited Izsadore with helping inspire his philosophy of Blackism. Izsadore was one of two women who played key roles in firing Fela’s political awareness. The other was his mother, Funmilayo Ransome Kuti. A friend of independent Ghana’s founding president, Kwame Nkrumah, she had been an early champion of Nigerian women’s rights and a prominent campaigner for Nigerian independence. In 1970, Izsadore stayed with Fela in Nigeria for six months, and returned for a shorter visit in 1976, when she sang on the title track of Upside Down. Izsadore is a competent vocalist, but, her presence aside, the main interest is in the lyrics, in which Fela observes that much in Nigerian civic society is a shambles: “head for down, yansch for up” (head down, arse up). “Go Slow” was one of several songs Fela recorded which critiqued the consequences of over-rapid urbanization – in this case, traffic jams – using them as a metaphor to describe deeper social breakdowns.