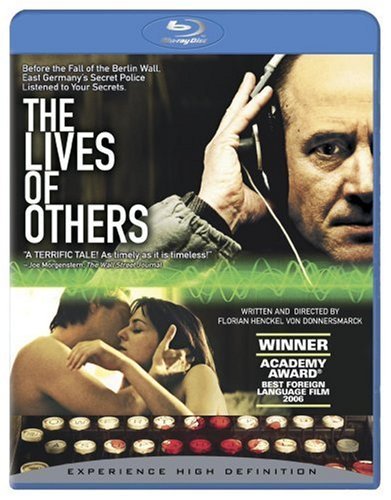 The Lives of Others [Blu-ray]

This critically-acclaimed, Oscar(r)-winning film (Best Foreign Language Film, 2006) is the erotic, emotionally-charged experience Lisa Schwarzbaum (Entertainment Weekly) calls “a nail-biter of a thriller!” Before the collapse of the Berlin Wall, East Germany’s population was closely monitored by the State Secret Police (Stasi). Only a few citizens above suspicion, like renowned pro-Socialist playwright Georg Dreyman, were permitted to lead private lives. But when a corrupt government official falls for Georg’s stunning actress-girlfriend, Christa, an ambitious Stasi policeman is ordered to bug the writer’s apartment to gain incriminating evidence against the rival. Now, what the officer discovers is about to dramatically change their lives – as well as his – in this seductive political thriller Peter Travers (Rolling Stone) proclaims is “the best kind of movie: one you can’t get out of your head.”