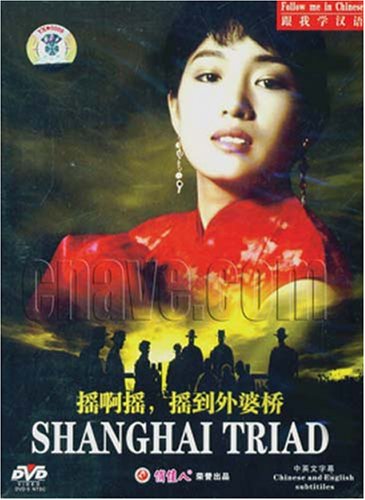 Chinese with English and Simplified Chinese subtitles. Set in the 1930s, the story is about a young boy, Tang Shuisheng (Wang Xiaoxiao), who just arrived in Shanghai working as a servant in a Triad owned nightclub. He is assigned to Bijou (Gong Li), a cabaret singer and girlfriend of Tang, the Triad Boss (Li Baotian). Bijou is cheating on the Boss with Song (Sun Chun), whom the Boss suspects is planning to betray him. After a bloody gang fight in which Shuisheng’s uncle dies, the Boss and a small entourage retreat to a peasants’ island. There, Bijou befriends Cuihau (Jiang Baoying), an unassuming woman who prepares meals for the visitors, while Shuisheng befriends Ajiao (Yang Qianguan), Cuihau’s daughter. Bijou unwittingly gets Cuihau and her brother-in-law killed. Song arrives and the Boss calmly confronts him with evidence of his treachery. The gang kills Song and Bijou. The Boss takes Ajiao back to Shanghai with him (saying she will be the new Bijou when she is older), along with Shuisheng tied to the sails of the ship.