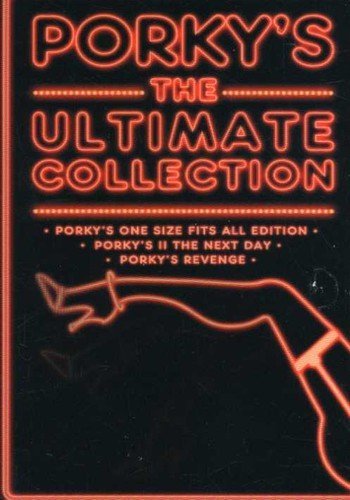 Get ready for some intense underage action in this brand-new, balls-to-the-wall collection of the Porky’s saga! The granddaddy franchise of guy comedies, these three uproariously unwholesome films changed the face of cinema to red as audiences across the world couldn’t get enough of this young group of boys questing to become men, and taking no prisoners along the way. Porky’s: One Size Fits All Edition Porky’s is a sleazy strip club where a group of underage boys hope to find some action. But when the owner catches them and dumps them in the bay, the boys shift their goal from getting in… to getting revenge. Porky’s 2: The Next Day The gang is back in another quest for vengeance! When Ms. Balbricker, aided by Reverend Bubba Flavel, pressures the school to shut down the teen troupe’s Shakespearean production for being too “obscene,” the boys don’t just get mad, they get even! Porky’s Revenge When Meat picks up a buxom babe, the gang discovers that Porky’s is back in business – and that the babe is Porky’s daughter. But When Porky kidnaps Meat to force him into a shotgun wedding, the boys set out to save their friend and shut down Porky’s for good.