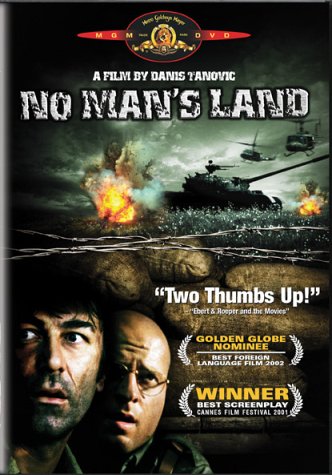 Between war and peace, humor and hate, capture and surrender, life and death lies No Man’s Land. Set in the unforgiving trenches of the Bosnian-Serb conflict, this “astonishing” (Chicago Tribune) film follows the story of three soldiers caught between two fighting lines. Hailed as “one of the best films of 2001,”* No Man’s Land is a “powerful, harrowing, shockingly entertaining” (Movieline) exploration of the absurdity of war. Fleeing enemy fire, an injuredBosnian soldier named Čiki retreats to a trench, where he finds himself trapped with a woundedcomrade and worse a Serbian! With no way to escape and with his fellow soldier lying on a spring-loaded bomb set to explode if he moves, Čiki realizes he must do the unthinkabletrust his enemyIf he wants to survive. *Associated Press, Chicago Tribune, The Atlanta Journal-Constitution, The Hollywood Reporter, New York Daily News, New York Post.