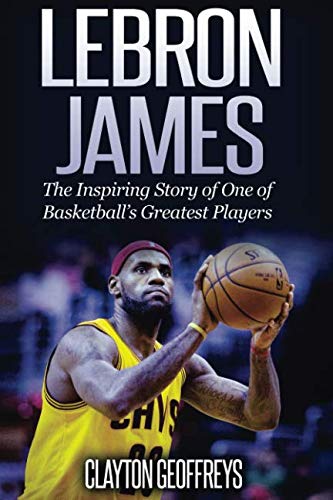 Read on your PC, Mac, smartphone, tablet or Kindle device! One of many riveting reads in the Basketball Biography Books series by Clayton Geoffreys.

An Amazon Best Seller, LeBron James: The Inspiring Story of One of Basketball’s Greatest Players, outlines the inspirational story of LeBron James.

Newly updated for the 2018-2019 season, this unauthorized biography of LeBron James highlights his journey so far in the NBA from once-doubted leader to perennial title contender. Few players demand as much excitement from crowds as LeBron James. It does not take a basketball fanatic to recognize and respect the name of LeBron James. Around the world, fans idolize LeBron for his unbelievable athletic prowess and collaborative team-based nature on the court. He has become one of the most respected and professional players in the league today. Read on to learn about LeBron James’ journey into the league, his first trip in Cleveland, his four years in Miami, as well as an outlook on his future when he has returned to Cleveland, before ending with his arrival in Los Angeles.

LeBron James has had a legendary basketball career playing in the National Basketball Association. It’s no surprise why day in and day out, regardless of who is the latest trendy player, LeBron James remains undoubtedly one of the best, if not the best.

Don’t delay, pick up your copy of this LeBron James biography book today to learn about his inspiring basketball journey. This is the perfect basketball book for sports fans of all ages as a weekend read.

Here is a preview of what is inside this Lebron James biography book:

An excerpt from this LeBron James biography:

When one talks about the greatest basketball players to have ever played the game, LeBron James always comes into the discussion. You speak of the greats such as Michael Jordan, Wilt Chamberlain, Bill Russell, Larry Bird, Magic Johnson, and Kobe Bryant when ranking the best players in NBA history. There is no doubt that LeBron belongs in such a discussion and may have even become greater than any player not named Michael Jordan.

In a career that started in 2003 when he was drafted as an 18-year-old high school phenom, LeBron James took the league by storm and has always been one of the best the NBA had to offer. Nobody in the world has ever seen a basketball player quite like him. His skills, talents, and physical gifts were unparalleled to the point that he was lauded as the next great thing in NBA basketball.

Physically, LeBron James was always regarded as the most gifted athlete in league history. Standing about 6’8″ and weighing at least 250 pounds of muscle, James has always had the size and strength that rivals the all-time great physique of Karl Malone. But despite his size and strength, LeBron James moves as quickly as a guard and has the athleticism of Dominique Wilkins.