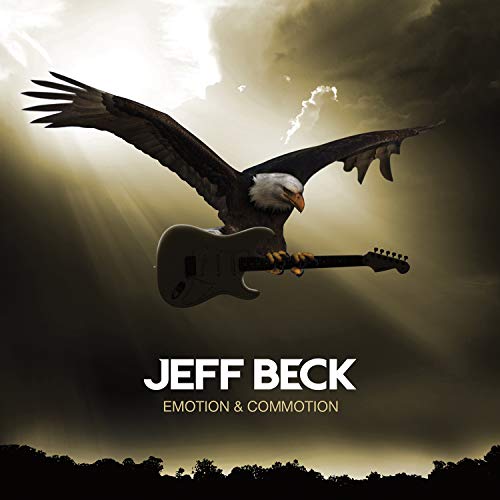 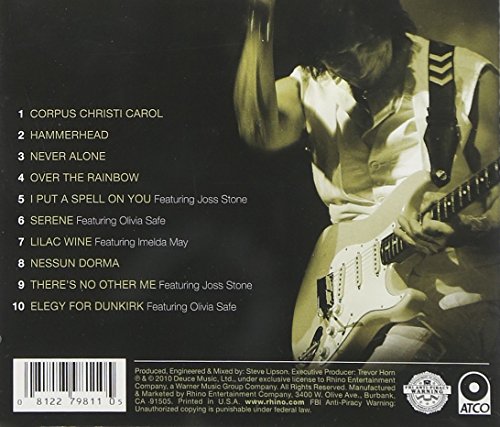 For his first studio album in seven years, Grammy-winning guitarist Jeff Beck returns with an eclectic mix of tracks that find the guitar virtuoso accompanied by a handpicked cast of talented musicians, as well as several songs accompanied by a 64-piece orchestra. Rhino unleashes the Rock and Roll Hall of Famer s restless genius with EMOTION & COMMOTION.
Beck recorded EMOTION & COMMOTION late last year at Sarm Studios in London with award-winning producers Steve Lipson and Trevor Horn. To create the album s diverse sound, Beck used a number of musicians, including appearances by frequent collaborators Vinnie Colaiuta (drums), Jason Rebello (keyboards), and Tal Wilkenfeld (bass). The album also includes contributions from a trio of singers: Imelda May (‘Lilac Wine’), Olivia Safe (‘Elegy For Dunkirk’), and Grammy-winner Joss Stone (‘I Put A Spell On You’ and ‘There s No Other Me’).
To complement the innovative tones he coaxes from his guitar, Beck recorded with a 64-piece orchestra on songs that range from Puccini s immortal aria ‘Nessun Dorma’ and Elegy For Dunkirk from the film Atonement to ‘Somewhere Over The Rainbow’ from The Wizard Of Oz and Jeff Buckley s interpretation of ‘Corpus Christi Carol.’
Beck says the idea of pairing his guitar with an orchestra evolved from the version of Gustav Mahler s Symphony No. 5 he recorded a few years ago. ‘It turned out amazingly well, but I didn t want to commit to an entire album of classical music. What appealed to me instead was the idea of bringing together these seemingly contradictory sounds on different kinds of nonclassical music.’
In addition to the orchestral pieces, EMOTION & COMMOTION showcases a number of original compositions. For ‘Hammerhead,’ Beck fires the rocker s opening salvo through his wah-wah pedal before falling into a deep groove carved out by the rhythm section and horn arrangement. At the opposite end of the sonic spectrum, the airy arrangement that elevates ‘Never Alone’ provides a wide-angle soundscape for Beck s imagination to freely explore the high-flying melody.
Before launching a world tour to support EMOTION & COMMOTION, Beck will unite with Eric Clapton in February for a series of exclusive shows in London, New York City, Toronto, and Montreal. The guitarists both former members of the Yardbirds will play separately before taking the stage to perform together.
After the shows with Clapton, Beck will play South Korea, Hong Kong, Australia, and Japan before returning to America for the U.S. leg of the tour starting mid-April and including an appearance at the New Orleans Jazz Festival on May 1.
For Beck, the new album and tour follows in the wake of a triumphant 2009 his most successful year ever. Among the many highlights were a sold-out world tour; his second induction into the Rock and Roll Hall of Fame; the release of the platinum-selling Performing This Week… Live At Ronnie Scott s, which earned a Grammy nomination for ‘A Day In The Life’; and magnificent performances with his band at the 25th Anniversary Concert of the Rock and Roll Hall of Fame at Madison Square Garden.