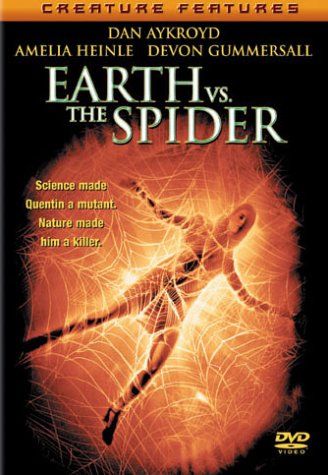 Earth vs. the Spider

This all-new Creature Features film delivers state-of-the-art creature effects by the Stan Winston Studio and was inspired by the Arkoff horror classics of the ’50s. Collect them all! EARTH VS. THE SPIDER is a terrifying horror thriller starring Dan Aykroyd (Pearl Harbor), Theresa Russell (Wild Things), Devon Gummersall (Independence Day) and Amelia Heinle (The Limey) and features special effectsby the four-time Academy Award(r)-winning monster-maker Stan Winston* (Jurassic Park III, A.I. Artificial Intelligence, Aliens). Quentin is a nerdy comic book fanatic who spends his days working as a security guard at a biotech research lab and his nights at home dreaming of superheroes. When thugs ambush the lab, his partner is killed in the shootout. Overcome by grief, he knowingly injects himself with a top-secret drug made from the blood of a laboratory spider. Slowly, the effects of the injection change his body – and as Quentin becomes more like a spider and less like a human, he develops