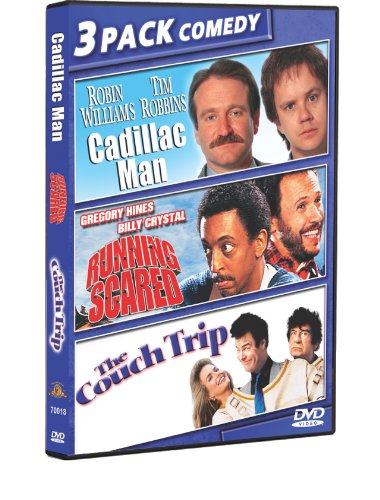 Cadillac Man (1990, Rated R, 97 minutes): Cadillac Man is a non-stop joy ride of lunacy. Joey O’Brien’s got some serious troubles. A Mafioso wants his hide. The woman in his life–an ex-wife, a space cadet girlfriend and someone else’s wife– are all trying his patience. Into the showroom walks Larry (Tim Robbins) a lurkhead terminator with an axe to grind. Now in a life-or-death situation, Joey is forced to do the one thing he does best…lie!

Running Scared (1986, Rated R, 107 minutes): Ray and Danny (Gregory Hines and Billy Crystal) are the wild men of the Windy City’s police force. The pair’s unorthodox methods get results in a tough town–until they come up against Julio Gonzales (Jimmy Smits, NYPD Blue), a smooth-talking drug dealer who is bucking to become Chicago’s first Spanish Godfather.